Daily fantasy sports betting sites are the up and coming trend among those who like to participate in fantasy sports games across a variety of leagues. There are many reasons for this but perhaps the most important one is that they incorporate the best of what makes traditional fantasy sports popular, with a fast-paced, day-to-day (or week-to-week) fantasy game where owners are rewarded as the season goes. Additionally, not being tied to a group of fantasy players that were drafted before a minute of meaningful action even took place is a big advantage for those that have had bad luck with season based, draft leagues.

The term 'fantasy sports betting' perhaps best describes the websites that host these types of tournaments and leagues. Users are able to play many daily tournaments where money is used to gain entry and has the potential for a larger return based on the results of that user’s lineup. DailyFantasySites.net is here to peel back the curtain so that readers can see if it's something that they could be interested in… we already know that it certainly is profitable! Furthermore, this website lists the daily fantasy gambling sites that are most commonly used by beginners as well as fantasy sports veterans that have plenty of experience winning money on fantasy sports.

What Are Daily + Weekly Fantasy Sports Games? Which Websites Have Them?

The term 'daily league' obviously implies the length of time that fantasy sports tournaments take at the websites. Contrast that with a traditional league that last all or most of the season and you have one of the biggest differences. But those differences do not end there.

Let's take for example a fantasy football league at a traditional site. Users will be entered into a league where there is a draft. The selection process takes place, and those players drafted by a user will be with them through the season. There can be transactions that occur such that players would move to and from teams, but again those players would be on that user's team throughout the duration of the season-long league. Teams will go against one another in a weekly matchup where it's head-to-head to compete for an overall win/loss record. At the end of the fantasy season, leagues will have varying playoff rules that will produce an eventual champion.

Now let's look at a typical daily fantasy league. Similar to a traditional league, there is a selection process. However this is not your standard draft. A player selected to one team does not render that player exclusively to that team owner for the day. All players are on the table and can be selected by any user in the league. The difference is instituted in a salary cap. Players are assigned a dollar value, where a team comprised of nine players cannot go over that designated cap. This keeps teams from being made up of the best of the best. Rather, it incorporates thought and strategy.

From there, a team selected by the user can then be entered into one tournament, two tournaments, or 100 tournaments if they feel compelled to do so. Or if the user wants to form another completely different team for another league that day that is perfectly fine as well. There are many options that users on a daily fantasy betting site can choose.

At most daily sites, there is also the option to choose a weekly league as well. The concept here is the same, except for the fact that the results are concluded at the end of the week. For example in the NFL, that week would start on a Thursday and end on a Monday at the conclusion of Monday Night Football. 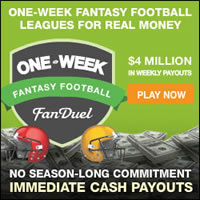 As far as daily fantasy sports betting websites go, those in the know typically go to FanDuel simply because they have an enormous selection of tournaments, stakes, payouts, etc..., but they also have the biggest player base of any of the daily fantasy websites operating today.

Of course, the NFL is the big dog at this website and though most pro fantasy football tournaments operate weekly, it does span about 20 weeks and goes deep into the playoffs. Other major sports are covered as well including both major college sports, NBA, hockey, MLB Baseball + plans are in the works to add more...

Getting money in and out of FanDuel couldn't be easier either! With PayPal as the leading option, users are given access to instant funding capabilities as well as same day payouts back to PayPal accounts.

DraftKings - Up + Coming In The Daily Fantasy Betting World 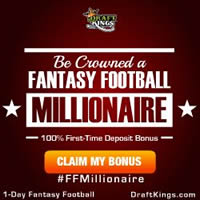 Making a profit through fantasy sports has never been easier or more accessible than with DraftKings. It's even got the attention of some of the top minds in sports, as ESPN NFL expert Adam Schefter is cited as a user! There is no long-term commitment for the entire season of any sport + the opportunity to form as many teams as you want are just a couple of the great features that can be found at Draft Kings.

Promotional offers run all the time at DraftKings as well. Currently, the website is offering to double the cash made on the first deposit + a free entry into the Millionaire Grand Final Qualifier in fantasy football. DraftKings pays out millions of dollars each month to winners on site that are real people just like you. 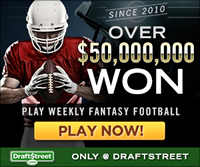 Featured in major news outlets like The Wall Street Journal and Sports Illustrated, DraftStreet in a highly reputable site built around the central focus of increasing the opportunities to make cash on fantasy sports. DraftStreet offers more sports to wager on than any other website going today. Based in the United States, it's one of the best legal betting option going.

Those who play fantasy sports games at DraftStreet are in complete control of their fantasy leagues + how much they want to play for. There are now opportunities and tournaments going every day, which means that the opportunities to play are virtually limitless. It's not all about money leagues at DraftStreet though, as those interested in playing free leagues can do so as well - which ensures that all fantasy players are included.

Daily fantasy betting sites pay out millions of dollars every month to winners of leagues and tournaments. The process through which money is won by users is simple. Teams can be entered into leagues, tournaments, head-to-head competitions, and 50/50 events. There are many different entry fees for tournaments. Players pay the entry fee to enter the tournament in hopes of winning one of the cash prizes. This can be a winner-take-all tournament, or a tournament that pays out a number of different spots. A team doesn't necessarily have to win the entire tournament to record a profit. The amount of money won by a team varies depending on entry fees, the number of teams in the tournament, and how many spots pay out.

The Legality Of Day-to-Day Fantasy Sports For Cash - Is It Legal + Legit?

Federal law states very specifically that fantasy sports gambling is different from normal wagering on sports. That means that betting real money at daily fantasy websites is legal and legit. Fantasy sports wagering is not under the umbrella of gambling. Because of this, we've seen the rise in the money going in and the money coming out of fantasy sports betting sites. It's been known for a while just how popular fantasy sports are, and these types of sites allow users to cash in on one of their favorite activities, legally.

The ways to deposit into an account created at a fantasy betting site involve major credit cards and PayPal. Visa, MasterCard and American Express are the most commonly accepted variations of credit card, while payment in the form of PayPal is pretty consistent across the board. Transfers of the funds into a user’s account occur right away. Essentially as soon as the mouse is clicked to submit the payment the funds are accessible and able to be spread across different leagues and tournaments.

How To Collect Winnings From Daily Fantasy Games

Payouts take place a couple of different ways. Users can accept winnings in the form of a check that is sent to the address on the account, or they can choose to accept them through PayPal. Of the two, a PayPal payout is faster, taking place electronically. Winnings are deposited instantly once the payout is approved by the website. There is the chance for other types of payouts to occur, but that information would have to be found on the site itself if available. Websites will have all of the information needed for players to review the payout options. Or if need-be, customer service will be able to help as well.

The amount of options available to users interested in daily fantasy sports betting is arguably the most appealing aspect here. While fantasy sports in the traditional sense are a lot of fun, this takes it on from a new angle, and it seems to be extremely popular. We want to invite you to learn more about the sites that are available. We have reviews of several different ones that come highly rated. Moreover, other information on daily fantasy betting sites in general is available throughout as well. The more people learn about what can be found at these websites, the more users sign up because they really provide a fun and unique experience.

Player prop odds in the world of sports betting are closely related to fantasy sports. In fantasy sports wagering, the better the performance a player has the more points they accumulate. Ultimately that adds up to a score, where a higher total wins. For player props, bets can be won on either side of a player's performance (meaning good or bad). A bettor can wager on a player doing poorly and win, just as easily as doing well.

Player prop odds are formed every day for a variety of sports. Each player prop will be tailored to an individual matchup. At most sportsbooks, player props are grouped by matchup, which makes it nice from an organizational standpoint. Within a league, betting sites do a good job at formulating and organizing their player props in plenty of time before a game gets underway.

For just about every matchup on the schedule that Bovada Sportsbook forms game lines, there are player props. But while game lines consist of only the point spread, moneyline, and game total, player props can be much more extensive. Think about the possibilities when a NFL game has 40 corresponding player props and how many betting lines are formed. That is exactly what Bovada offers those who bet there.

In terms of how much money can be made from betting props at Bovada, it depends on the wager amount. Payouts will range depending on the line, but users like to bet on player props at Bovada because it shrinks down the variables for the game and focuses on one player. All of the props formed at Bovada can be viewed whether or not a player has an account, so you are interested be sure to browse the betting lines formed.